What is an SMTP server

Home » What is an SMTP server

The acronym SMTP stands for Simple Mail Transfer Protocol, the procedure behind the email flow on the internet.

What happens when you send out an email? The process of email delivery is actually quite similar to classical mail: an organized system takes care of your envelope and through a series of steps it drops it off to your recipient. In this process, the SMTP server is simply a computer running SMTP, and which acts more or less like the postman. Once the messages have been picked up they are sent to this server, which takes care of concretely delivering emails to their recipients.

Basically, the journey of a message from your computer to the recipient’s is like this: 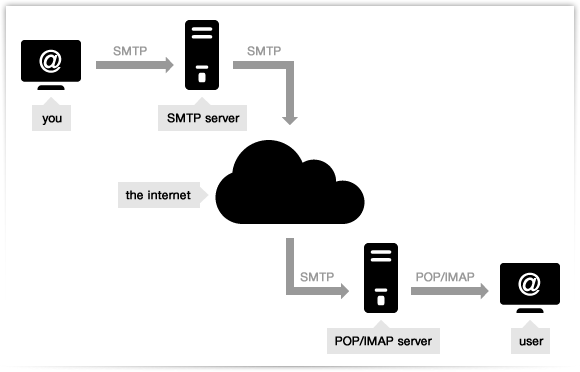 It must be underlined, though, that the SMTP servers used when you send your “normal emails” – e.g. the ones associated to providers like Hotmail, Gmail and Yahoo Mail – are shared among users and they are based on non-dedicated IPs. Which means that you could end up to rely on an IP that is also used by a spammer: a fact that will negatively affect the correct delivery of your messages. Also, common providers establish some strict limits on the number of emails you can send (e.g. Yahoo’s restriction is 100 email per hour).

That is why, if you plan to send a massmail or set up an email campaign we recommend to use a professional SMTP Relay Server like turboSMTP, which guarantees a controlled IP and avoids all the aforementioned problems.

You can register and get a free package of 6000 emails per month, then upgrade to the plan that best suits your options.

The email template affects deliverability too

Crafting a neatly coded HTML layout is essential to boost your delivery rate. We suggest to do that with MailStyler, an excellent and easy-to-use software.

Try it for free

Manage Cookie Permission
In order to provide the best experiences, we use technologies such as cookies to store and/or access device information. Consenting to these technologies will allow us to process data such as browsing behaviour or unique IDs on this site. Not consenting or withdrawing consent may adversely affect certain features and functions.